LESSONS FROM THE MOVE: Rome Wasn’t Built in a Day

I was about halfway through packing up the studio, when I realized there were so many packed boxes, I couldn’t even navigate my space. So I had to move several dozen boxes home for safe-keeping.

Then I thought, with the extra space I’ll have, I should also pack up some of the supplies I’ve stored in our garage. That added a few more dozen boxes.

There was no place in my garage for those, too. (Why does packed stuff take up more room than when it’s just “out”???)

So we found a half dozen pallets, set them up on the porch, and tarped the stack just before the next round of drenching rainstorms hit last weekend.

It looked like we could do the actual truck rental/moving the first weekend of February. Unless it rained….fingers crossed!)

Then my darlin’ hubby reminded me he had a three-day conference to attend that same weekend. And the weather report? Three days of rain. Three days. Of rain.

On that Wednesday, January 30, late afternoon, my landlord asked me when I thought I’d be totally out of my space. I explained it might be an extra week. (I had previously offered to pay for the extra week, if it came to that, and he agreed.)

That’s when he said, “What would it take for you to be out of this space by tomorrow?”

He then offered the use of a truck, and the aid of two of his own employees, if I could move the next day.

Of course I said yes.

The next 36 hours were a hot mess. I entered that stage of packing where you just grab stuff, throw it in a box, and tape it shut. By the next morning, I wasn’t even taping boxes shut.

The truck was huge. Jon says it was bigger than my studio! It had a sign on it about “Junk Removal”, which, in other circumstances, would have hurt my feelings.

The two guys were wonderful, and thorough. The only thing that broke in the process was one light bulb. They even loaded my box of packing supplies, and a bag of garbage.

And so here I am, in my wonderful new space, filled with empty shelving racks, my desk, my sewing table, many many many boxes, and said bag of garbage. 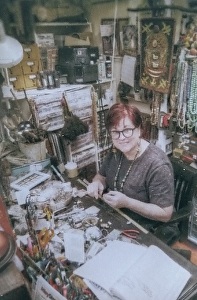 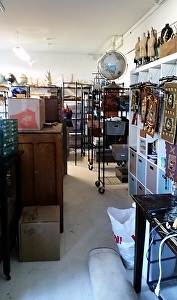 (Don’t cheer yet, we still have to move all those tarped boxes on the back porch!)

I should be cheering, though. I should be thrilled. The worst part is over, right?

Not so fast, cupcake.

The configuration of my new space is totally different. While my husband was gone, there was only me to move heavy furniture and such.

I can’t figure out where to put my desk.

I pushed it here and there, up against this wall, back out to another wall, placing it perpendicular to a wall. Finally, yesterday afternoon, I gave up and left it sitting in the middle of the room.

How did I get this far, and get so blocked, so quickly?? I felt like an idiot.

Here’s how I finally got through it:

I pretended I was talking to a good friend.

If a good friend had just gone through a major, last-minute move, with almost no help, from a noisy (ongoing construction, jack-hammers, regular hammers, buzz saws, etc.) and tightly-packed little studio, to a slightly larger studio, in the middle of the rainiest California winter we’ve ever seen, would I call them an idiot?

If a good friend had gone through a year like mine (loss of both parents, my daughter’s loss of her first child-in-the-works, making five trips across country to be present for all three, and a sixth trip already this year), would I criticize their lack of energy and brain-capacity?

If a good friend had done their best to meet all commitments, gallery openings and receptions, special orders, etc. and now could barely find the time and energy to even unpack their supplies, would I chide them on their work ethic?

If said friend collapsed (in between the oh-so-many-stacks of boxes) in the middle of their studio because they couldn’t figure out where their desk should go, would I make fun of them?

So why was I being so harsh on myself?

One compassionate friend and blog follower left a comment for me about their moves (office and house.) They made note that it took them 12 weeks, in both situations, to find the perfect place for everything. (Thank you, Susan!)

I may not find the perfect spot for my desk for awhile.

Heck, even if I do find the perfect spot for it, I’m gonna have to move stuff around again anyway! I realized I need a big rug in the new space. (It’s echo-ish, and the floors will be slippery if they get wet.) So of course I put myself in a tizzy searching thrift shops for one, thinking I had to have it in place before I set up.

But then I found a super-cheap room-size rug on eBay for under $100. It also ships for free! It’s attractive enough, subdued enough not to distract from my artwork, and certainly not “precious” enough to worry about spills and stains, too.)

So today, I finally went to the gym, for the first time in weeks. It was good to be back!

I got home to find another offer, from a good friend, to help move more stuff. I always hate to ask for help, but they insisted. “I always enjoy our talks, so I’m doing it for myself, too!” they said. I’m taking them up on that! (Thank you, Laurie!)

And here I sit, sharing my slowly-untangling thoughts with you today.

I hope, if you are also facing something overwhelming in your life, that you have good friends to help you through.

And even if you don’t, I hope you are as kind to yourself as I’ve learned to be, today.