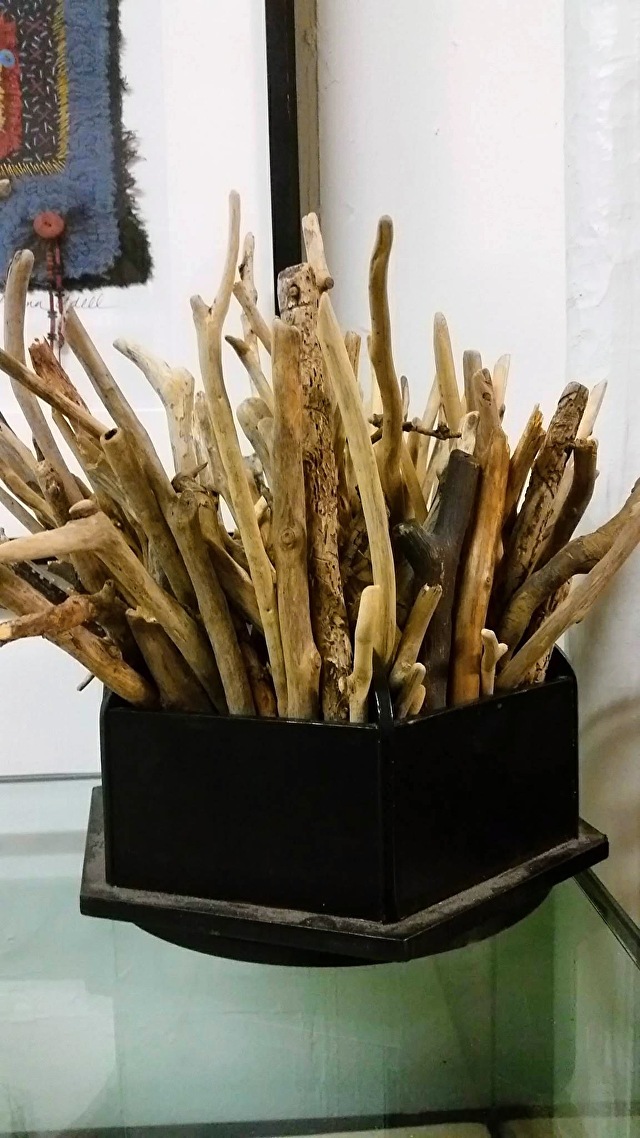 Luann Udell shares how making the work we love, is a working meditation.

Our brains are amazing! But we have to make sure we don’t overthink it….

After a full month of packing, one day of intense moving, and another month of unpacking, sorting, arranging, and making an empty room my newest creative space, my brain backfired Sunday.

I got to the studio nice and early. But my heart just wasn’t in it. I wandered around restlessly, moving a few things, put them back, and finally went home. I called my husband before I left, asking him if he wanted to blow off work and go for a drive. “YES!!!” he said. (He’s been working nonstop for months on a creative project, too.)

I thought that would take care of my ennui. Nope. Today is one of those days my editors, past and present, hate: I just couldn’t figure out what to write about.

And so here I am, typing furiously, to share the “aha!” moment I had today. (Technically, it’s still Monday on the West Coast….)

I got to my studio late. Yet again, I just wasn’t feeling it. I did sort a few things out, labeled some drawers, etc. (I organized my sticks. Yes, I have a picture.) 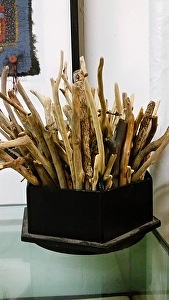 But I just couldn’t get any energy to really set out my framed work, my jewelry, etc. (Most of the shrines are at a two-month long show at a gallery for another few weeks, which was a blessing during the packing and moving part!)

I couldn’t figure out why I was so unmotivated, after weeks of incredible energy and focus. And suddenly, it hit me.

I can’t figure out how to hang my work!

Bear with me here. I have quality picture hangers, I have just as much wall space as the old studio, and I’m pretty flexible about where they should go.

But the first time I hung one, I couldn’t hammer the nail-and-hanger into the wall!

At least that section of the wall is a sort of painted-over old paneling, the kind that has a lot of give, and probably isn’t real wood. I banged, and the wall bounced, and I got nowhere.

Okay, I thought, I brought in all those expensive stick-on hooks, the kind you can pull out the sticky strip later, and reuse. I was a little nervous about using them, because they have a tendency to not work well in cold or damp weather. But I gave it a long time to “set” and hung the first framed work. It look great!

It didn’t look so great an hour later, when it popped off the wall and shattered the frame. Dang!!! (That’s not what I actually said, but I’m trying to keep it clean here.)

The worst thing is, I couldn’t figure out what to do next.

Try another version of the same brand? Look to see if any of the walls are “normal” and “hammer-able”?  Check in with another artist there, to see if they had the same kind of walls? Check in with the building manager to see if he had any ideas??

Consciously, I thought I was “solving the problem”. But today, after two days of not coming up with a solution, I realized I felt “stuck”. And I couldn’t get myself to move forward.  It didn’t help that the next thing on my to-do list were taxes.

Oddly, that morning, at the gym, on my way out I said something to one of the employees. She was feeling a little off, she said. Me, too, I said. Maybe because it’s Monday?

But then I realized, Mondays don’t mean anything to me. They aren’t the day I “have to” go back to work I don’t care for. Monday is just another day where I decide what I need to work on. And it was sunny, after the “atmospheric river” that’s been hounding us for months. And it was actually almost warm. Why were we so down??

I shared with her a story I’d just read in a book I’m rereading, Unseen City by Nathanael Johnson. It’s a delightful book about how Johnson, wanting to share the wonders of nature with his three-year-old in Berkeley, CA, ended up learning—and learning to love—the species of animals and plants most people find offensive. He shares delightful stories about crows, pigeons, ants, snails, turkey vultures, and….

One day, as he walked along a street, he entered a mental state of high dudgeon. The world was an awful place. He felt angry, resentful. Then, a block later, he realized how good his life is, and felt normal again. He didn’t think anything of it until the next time he walked down that same street—and felt the same anger.

These bizarre mood swings continued for days, in the very same block, until he finally paid close attention to what was happening when they appeared.

He realized he was smelling a very foul odor, little whiffs. It actually triggered his inner feelings of disgust and anger, but unconsciously. When he looked for the culprit, he realized it was the fruit of a gingko tree, one of the oldest species still in existence today. The female gingko produces a fruit/nut that smells God-awful. (Words like dog poo, rot, and vomit are usually used. Oy!!)

A bad smell gave him hopelessness, despair, and anger.

So, two moments illustrating that what clouds our judgment, creates uneasiness and resentment, feelings of “less-than”, even anger, that had nothing to do with current circumstances.

Our brains are marvelous creations, capable of amazing feats. Our brains are also very ancient. Our brain is hard-wired to keep us safe from danger, like eating spoiled food or anything “disgusting”.  (For me, that’s broccoli!) As I mentioned in a comment in my last article, “keeping us safe” is also why we tend to ruminate over hurtful things people have said about us, or our work, while we forget all the wonderful things people have said. People who say hurtful things can be “dangerous”, and so their words “stick”.

And when we’re “stuck”, it keeps trying to work to find a solution, perhaps keeping us unsettled, unfocused, and vaguely uncomfortable.

When we are being “played” by our unconscious thoughts, we make up a story why we feel that way, just as Johnson thought life was unfair, unfulfilling, etc. before he realized he was being “triggered” by a bad smell. I made up a story about how I was too dumb to hang a picture right, that I felt stupid having to ask others how they managed. I was angry at my cat, my dog, and my husband, and I felt like I had nothing to say this week. (I do, bear with me.)

The solution? It’s another reason artists can usually deal well with adversity and obstacles, and persevere.

Making art, making the work we love, is a working meditation.

Doing work we find worthy, fulfilling, productive, actually brings us joy. It allows us to get into a deep, working mental space—literally, a working meditation–sometimes called “the Zone”. Time passes quickly.  We are immersed in our process. We are restored to our better selves.

So the more we “make”, the better we feel.

That’s when I realized that, though I would love my space to be “perfect” before I actually get back to work, it might be time to actually do some work.

So tomorrow, I think I’ll make something. Maybe finish that new bear I had to set aside two months ago. Maybe a new necklace. Heck, maybe I’ll take my sewing machine out for a spin!

I’ll try not to use my feelings-of-the-day to judge my life, or my art.

Have you ever realized your downer mood was actually brought on by hidden thoughts or unrealistic goals? Or a gingko tree? (I don’t mean good goals, I mean like when I thought I could get my new space set up in three days!) What brought you back to your happy place? Lemme know!