Today I’m unpacking more boxes of studio stuff. I’ve set a goal for myself: Five boxes a day, more if I can fit them in.

At the first the haphazard packing was unsettling. (There are many ways to pack. But when you’re in a hurry or can’t do it all yourself and other people are doing it, and space is limited, you pack very differently!)
For example, one box might hold six earring holders, a small book, a rock and a beanbag. (I use them in my display, so it’s not THAT weird….) Today, one box held one pottery display stand. That broke. (And that’s okay, too, because I can glue it back together.)

But I’ve decided to now view each box as a puzzle ball, those charming presents I used to make for the kids when they were little. I’d take a tiny treasure and wrap it with strips of crepe paper, adding coins, confetti, flat-ish treats and toys, until the whole thing was about the size of a large softball. (They also took about 10 minutes to unwrap, which really prolonged the excitement and added to the joy.) (I think.)

My third box held my ink stamping pads and most of my spools of thread. If you ever visited my studio, you know my thread collection was extensive.

And here’s my thread tip:

Be aware that thread has a shelf life.

If you’re a seasoned sewer, you already know this. But when I first started sewing, I didn’t.

I would start a project, thread my sewing machine, and start to quilt.

And the thread would break.

I’d re-thread the machine. The thread would break again. And again, and again.

Then I realized the thread was too old, or sun-damaged, to use.

This can occasionally happen with new thread, too. I took my machine in to Russ Moline at The Moses House in Keene. He was baffled, too, until he finally tested my brand new giant spool of quilting thread. It was a faulty batch, and broke easily. A sad, but fortunately inexpensive “repair” of the sewing machine!

Cotton threads are especially prone to this. But sometimes silk thread can deteriorate, too.

So before you buy a wonderful stash of vintage thread, unwind a few inches and give it a yank. If it breaks easily, you will have nothing but heartache when you use it. (Even hand-sewing may be problematic, because it will wear even as you pull it through the fabric over and over….)

On the other hand, sometimes thread that LOOKS worn out or faded will still be strong enough to sew with. If you don’t like the fading, simply wind off enough thread till you get to the layer that was not exposed to heat and light.

And of course, just because that old thread isn’t functional anymore, doesn’t mean you have to throw it away. Fill a mason jar, a thread rack, or a pretty bowl with your thready treasures, and put them on display. As I go through my stash, the rejects are tossed into a new lamp I just bought, with a clear base that can be filled with….spools of thread! 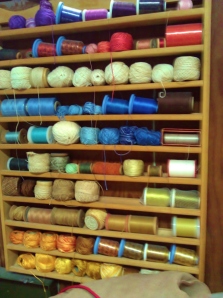 My most recent article for The Crafts Report is 26 tips on how to make your craft show experience better. I was going to say, “more better”, but that would be redundant, wouldn’t it?

And don’t ask me what the title means, I didn’t pick it.

Like Loading...
I meant to post this yesterday, but needed to calm down first.
I’m frustrated beyond belief. You can skip to the end if you don’t want the details.
I found out 15 minutes before I left to vote, that I would not be allowed to vote. Not in California, due to voter registration restrictions (thought I’ve lived here almost six weeks), and certainly not in New Hampshire (because I haven’t lived there in two months.)
I am over 21, I am a U.S. citizen, I have a residence, I pay taxes, I am registered to vote. I educated myself about the local issues. I have a California driver’s licence, and a Sonoma County Library card.
But I was not allowed to participate in yesterday’s election.
Backstory: We moved to Santa Rosa at the end of September (from New Hampshire) in a whirlwind of a move that took less than a month on our end, and left us with no time to even look for a new home on this end.
By a miracle, we found a little place to rent our first day here. We moved in a week later, on September 22.
I immediately set about trying to get a driver’s license, register our car, and register to vote. I couldn’t believe I had to make an appointment a week in advance for the first two, but thought I had the third taken care of. (I filled out some voter registration form, I THOUGHT, while signing up for coupons and offers in a moving packet I found on-line.)
I showed up on October 9 at the DMV. (It’s overwhelming and confusing, but basically a good system. I’m impressed!) Halfway through the process, I realized we had misplaced our NH car title. I did get my driver’s license and applied online for a replacement title to be sent to me from NH.  It was not explained to me what would happen if I didn’t get that replacement on time.
It took over two weeks.
I went ahead and registered to vote online on Oct. 26. (For real, this time. I wonder what that other “voter registration” site was??)
As soon as I had the new title in hand, I made another appointment to get the title in place for Oct. 28–the day before I had knee surgery.
I got my title–but had to pay hundreds of dollars in penalty fees because the process had taken longer than the 10 days allowed. (10 days to register my car, when I didn’t even have a place to live until Sept. 22? ? Really??) That’s when I was told I could have STARTED the process on 10/9, and avoided the late fees.
After following the recommendations of the local paper, The Press Democrat, for the past month, I made a list of all the issues, candidates and propositions and looked online to find out where to vote. I looked up my district and where I was supposed to vote.
On a whim, I decided to look up my voter registration status online. Guess what?
I wasn’t on the list.
Oh, I’m technically ‘registered’. But I’d missed the cut-off date of Oct. 20. By six days.
I would not be allowed to vote.
I have voted in almost every every single election since I was eligible to vote–41 years now. I even volunteered at the polls the last few years. It’s exciting to be part of that process, and I loved it. We even had same-day voter registration–you could register at the polls and vote 10 minutes later. I remember a young woman who was voting for the first time six years ago. She was determined to vote for the president. I sent her to the registration desk. Twenty minutes later, she was back, and I handed her her very first ballot. The look on her face….  Uplifting.
Not the case in California in 2014.
At no point along in the registration process for voting did I see any indication I had to register before Oct. 20. (I’m sure it’s something “everybody knows.” But I didn’t.)
Of course, it’s way, way too late to vote as an absentee ballot in NH. Not that they would have allowed me to. After all, I’m technically registered to vote in California, and was a legal resident as soon as I had my CA driver’s license. And I was no longer a resident in New Hampshire the minute we sold our house and had no ‘home address’ there.
So I’m a stranded voter with no place to vote. And I’m appalled.
A 15-day cut-off before the election?? There’s a “dead period” where I don’t exist as a voter in NH nor CA.
That’s not right. I live here. I can prove it. I get mail here. I’ve already been here long enough to to pay late fees to register my damn car here–but not to vote?? (Yes, my fault on the penalty fees, but come on….a 10 day deadline?? It took me almost that long to even get the appointment.)
I understand the California law has been changed (although I’m bemused New Hampshire, of all states, has proven to be more progressive than California….) I’ve been assured I can vote in the next election. Wow….thank you, California. I’m so grateful.
But this was still an important election. Heck, every election is important.
And I’m mad as hell I didn’t get to participate.